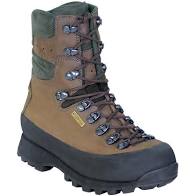 My story:
I have worn a lot of different hunting and hiking boots over the years but had yet to try Kenetrek boots, though I had heard amazing things. This spring bear season I was lucky enough to try a pair! Due to it being spring in Idaho, which is notoriously unpredictable weather wise, I decided to go with the 400 gram Thinsulate. This way I would have (hopefully) the goldilocks of boots…not too hot nor too cold but just right.
Out of the box, I was impressed with the lightness of this heavy-duty hiking boot. The first few times I tried them on I had to play with the way I tied them to keep my heel from lifting and rubbing. It took me a couple of times to tie the laces right for my foot. I found for me, tying them tighter at the ankle with my heel pushed all the way back was the only way to get my heel to stop rubbing. Once I had that figured out, the boots fit perfectly. As with all boots, they were very stiff at first so I broke them in wearing them around the house and going on short hikes. It took me about 60 miles of wear for them to feel truly comfortable. I found with the one-piece vamp construction that over time the boot formed and fit better and better. This one-piece construction also came into play during the damper parts of my season to help with keeping my feet dry.
Throughout my bear hunting season, the weather ran from mid-teens with snow and rain to mid-90s. During the warmer days I was worried that with the 400 grams of Thinsulate my feet would become too hot and sweaty. I quickly discovered that I had nothing to worry about as my feet remained temperate and dry. The Windtex membrane used on the Kenetrek Mountain Extreme boots is surprisingly breathable. Although, as a disclaimer I must admit that my feet don’t sweat very much so if you are a person that has a tendency to sweat, take that into account when deciding how many grams of Thinsulate you want! I was equally as pleased with these boots during the more frigid days as my feet never once got cold nor did water ever seep in (even when I fell into a creek while attempting to cross it).
While the breathability of the Kenetrek Mountain Extreme 400s and their ability to keep my feet at a comfortable temperature is impressive, my favorite part about these boots is their traction and stability. On a particularly difficult day of hunting, I side-hilled through blow down, avalanche chutes and shale rock for a solid four miles. With every step I expected to either break my ankle or slide to my death. I’m happy to say neither occurred. In fact, the only time I fell was into the creek due to my own clumsiness. The ankle support these boots provided in this rough terrain was outstanding. As for the traction, these boots gripped whatever I was stepping on as if I was on dry, flat ground. Between the slippery rocks and steep, snowy inclines it was by the grace of God and the Kentrek Mountain Extreme 400s that I did not tumble down a mountain. Had I not been wearing them I am almost certain an injury would have ensued. Not only were they extremely durable and supportive but all things considered by the time I returned to camp my feet felt relatively good and the boots were still in great shape, even after the beating they took.
All said and done, these boots saved me this spring. I plan on wearing them until I destroy them, which by looking at the craftsmanship of them, may take me awhile.

The only issue for me was the break-in period for these boots was longer than I am used to. That being said, once they are broken in the Kenetrek Mountain Extreme 400s are game changers!