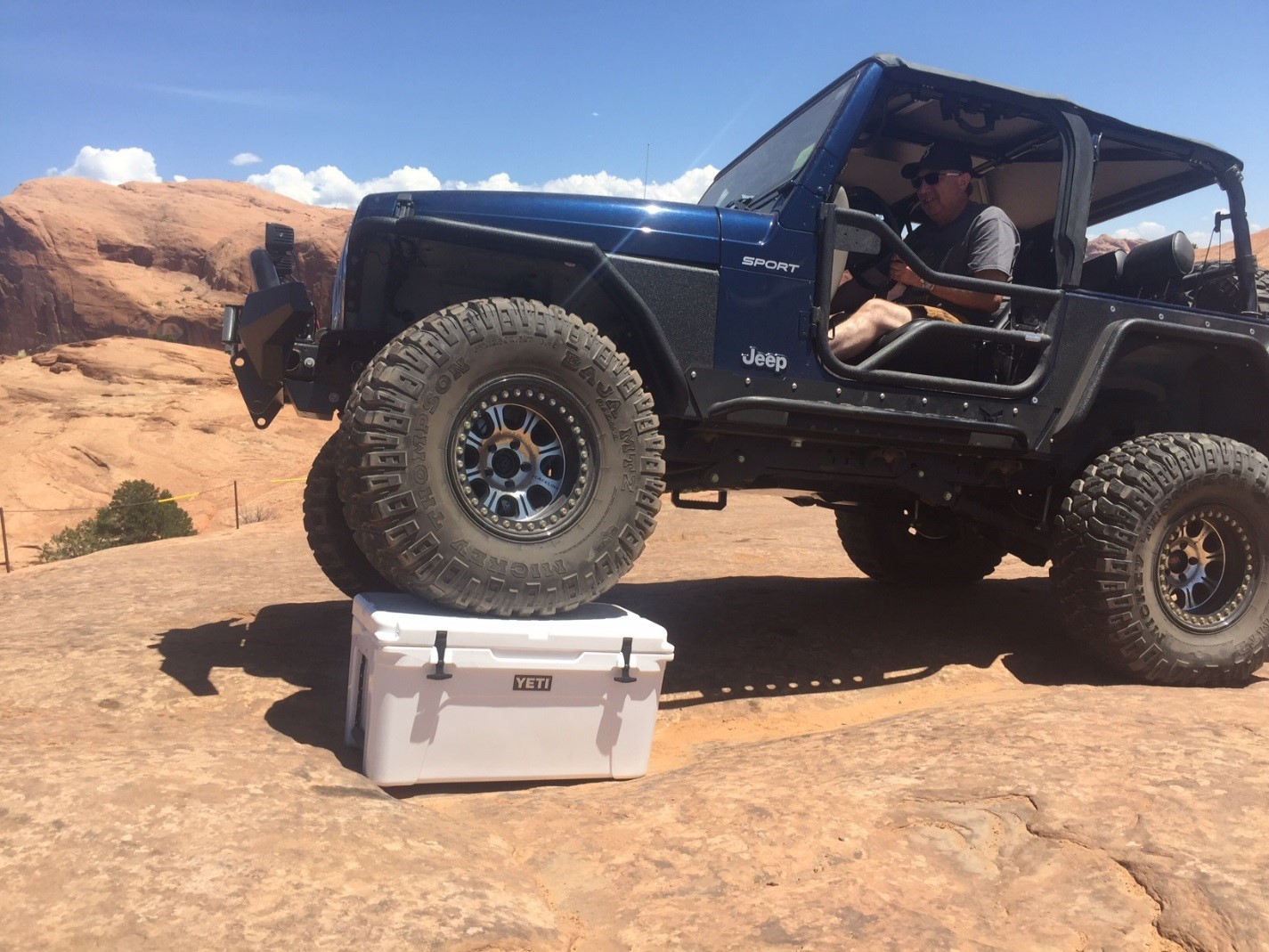 The YETI Tundra 65 cooler is a heavy-duty generalist, equally adept at keeping your catches cold in the field or serving as the drink-and-food hub for a tailgate, party, or other times of general revelry.

This ice chest is plenty roomy, holding the recommended 39 cans, a keeper redfish or a small quartered deer. Whatever you choose to chill, you know this top-quality cooler will keep it cold longer thanks to 2 meaty inches of insulation and our cold-keeping gasket. Dry ice compatibility allows you to keep everything frosty even on your longest excursions. Need your YETI to serve as a hunting cooler one weekend, a marine cooler the next, and a party cooler right after? Don’t be afraid to mix it up: the durable polyethylene material can stand up to a variety of tasks again and again, and the integrated, self-stopping hinges scoff in the face of excessive use. The handles are made from marine-grade polyester rope with textured grips for easy carrying, even fully loaded. If you’re taking the Tundra 65 out on the water as a marine cooler, don’t forget that it makes a great casting platform in a bay boat. And as a hunting cooler, the grizzly-proof design gives you peace of mind in bear country. Although it tends to frustrate the bears.

Ah, the Yeti. This mythical beast that is said to live in the frozen peaks of the Himalayas. What does that have to do with a cooler you might ask? Well, nothing really other than making the comparison to a very strong and resilient beast that can withstand the bitterest cold. The Yeti cooler is all those things but rather than withstand the cold it is built to keep it in. So, what is in a name right? Well, in this case a lot because when you think of the Yeti you should be thinking about something that is rough, tough, and can deal with the cold. If a cooler had a spirit animal I guess we would all hope that it was the Yeti. Thank the lucky stars somebody finally figured that out!
I acquired my Yeti Tundra 65 at a perfect time of year. This is the season of camping, BBQ’s, softball games, and all manner of outdoor activities. It is also the season for heat and with heat comes the need for a good cooler. What is the need purpose of a cooler if not to keep the things inside it cold? We had a need for cold and I was ready to put the Yeti to the test.
Everything happens for a reason right? That is what my parents always used to tell me so that is what I want to believe. The same day the Tundra 65 hit my doorstep I was hosting dinner with some friends. They had been telling me of their upcoming trip to Moab to hit the Jeep trails and test their salt on those burning rocks. I know that I am the reviewer and that I am also the person who should be testing but I had to use this opportunity to my advantage. I asked them to take the cooler into the scorching heat of Moab and put it to the test for me. I had one real test in particular that I wanted to see them preform. I once saw a jeep on top of a Yeti cooler and at the risk of ruining a very expensive cooler I wanted that shot for my review. I wanted to make sure that this cooler was as tough as the beast of the same name. As you can see I was not disappointed. My good friend Kelli’s dad obliged my request and popped his jeep up on the Tundra 65. So, the durability test was passed with flying colors. My friends used the Tundra 65 in the hell fire of the Moab desert for over a week and when they brought it home they were very reluctant to give it back. They loved the Tundra 65 and reported that of all the other coolers in their camp this one held ice the longest. I was super excited to hear the great success that my friends had with the cooler in the burning hot desert. Now it was my turn to put the cooler to the test. I was determined to not just fill the thing with ice and see if it really could last 5 days. Sure that is a good way to test the coolers ability to hold ice but I’ve never had a cooler full of nothing but ice. So, to really test the cooler I needed to fill it with the typical types of things that you would find in a camping cooler. I took the cooler to BBQ’s and softball games full of beer, pop, salads, hot dogs, bacon, and whatever else the situation called for. Now, I am sure you are saying that any cooler can keep beer cold for the duration of a backyard BBQ and I would not disagree with you. It would take a lot of ice to offset the cost of this cooler compared to others of the same size. That all sounds good but let’s look at this from the view of a person going into the wilds without the ability to continually add another bag of ice to a sub-par cooler. For this test I wanted to examine two parts. First, I wanted to see how versatile the Tundra 65 was. Was it practical to use as a normal 1 or two day cooler?
I found this cooler to be a bit heavy but the addition of two long and sturdy rope handles make it very easy to move. I have a love hate relationship with the rubber BEARFOOT NON-SLIP FEET as they are great for making sure the cooler stays put but can make it a real “bear” to move. I am so accustomed to just sliding cooler here or there and this is not really an option with these feet. As stated above the cooler is a bit heavy but it is absolutely capable of being a day trip or BBQ cooler. The second part of my test was relatively simple as it was just a longevity test. I just kept the items from the BBQ’s and the softball games in the cooler for as many days as the ice held. On average it was around 4 days. That was pretty dang impressive as the weather here in Eastern Washington has been quite warm. I also took the Tundra 65 to my brother’s wedding for which we camped at the venue for 3 days. It again passed the test keeping all my items cool and holding ice for all 3 days. In the end I have to say that I now have a bullet proof cooler that holds ice better than anything else I have ever used. I am a huge fan of this cooler and this company and see nothing but more good times ahead. Fine job YETI!

What can be done better?
The only this that I was not a huge fan of was the BEARFOOT NON-SLIP FEET. I like how it keeps the cooler from sliding all around in the back of the truck but it makes moving the cooler a bit of a pain. I cannot use this as a real negative though as the test was on how well the cooler worked not how well it slides. The YETI Tundra 65 is a great product and I do not feel that you would regret the purchase.

I give the YETI Tundra 65 5 STARS for preforming the high standard that I expected.