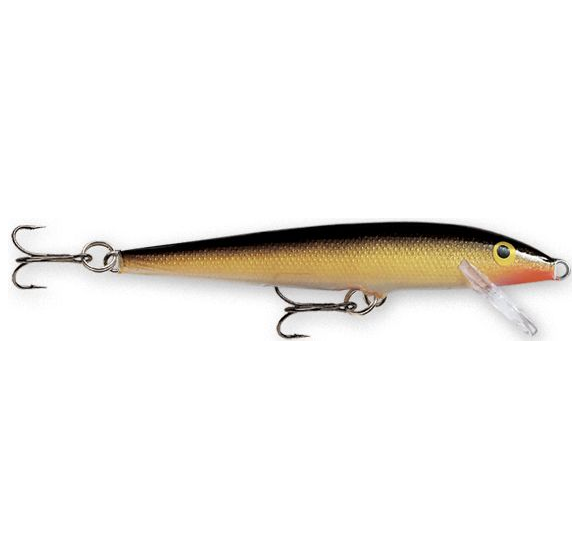 The most ancient of fishermen’s axioms may be that big fish eat little fish. And for the freshwater angler, the classic Rapala in black over silver, black over gold, or the Rainbow (sizes F7-F11) may be the granddaddies of lures. Rapalas are deadly for trout when tied correctly and fished correctly in lakes and on rivers and streams.
Maybe you’ve fished Rapalas and maybe you’ve said, “meh, there are other lures and spinners that work as well or even better.” Hold on just a minute! You’re about to learn a few simple yet critical details that make fishing with Rapalas a whole lot more effective.

Tie It Right
• The Rapala is engineered to mimic a wounded minnow; everyone knows that. But did you know that using a swivel and your knot choice will affect its action (and its results!)? The first half of the equation is to tie it right so it wiggles the way it was engineered. The second half is to fish it right, and I cover that later.
• Swivel or no swivel? I recommend against it for the simple reason that a swivel affects the lure’s action. That said, fishermen have a lot of success trolling by adding split shot to the line, about 2 feet above the Rapala, according to the weight needed to keep your uniform target depth. I’ve successfully fished Rapalas in a downrigger to the depth the fish are holding in.
• I recommend using the Rapala knot when fishing these lures. Rapala designs and tests its lures with a loop at the nose of the Rapala. I’ve included a diagram of this knot in case you need help with that.

Size it Right
• Floater or sinker? Where are you fishing and at what depth? For rivers and streams I recommend the floaters. Cast into the bank and pull it back through the riffles, runs, and pools. The CountDown Rapalas and the Shadow Raps work great in the lakes. They sink at the rate of about a foot a second, so you can estimate the depth by counting down. Play with different depths until you find out where the fish are holding in the lake.
• 7.9,11. I seldom use the smaller lure sizes (3 and 5), but I do not discount their effectiveness. Given the choice, most of us want to catch the bigger fish. The 7, 9, and 11 will attract bigger trout. I am particularly partial to the size 11, which weighs 9/16 ounce and is the first size that uses 3 treble hooks (instead of 2).
• Top 3 models for trout. Rapala makes a wide range of colors and sizes. I think you will be hard-pressed to outperform the classic silver, gold, and rainbow trout models. Here is a photo lineup for reference: Fish it Right
Here are a few pretty good (albeit general) rules:
• bright day, clear water, light-colored lure
• dark day, cloudy water, dark-colored lure
• use the most fish-like patterns in clear-water conditions
• use highly visible, patterns in cloudy water. (Gold/orange Rapalas have a well-earned reputation for producing larger than average trout.)
Rapala Fishing Rivers and Lakes
Get several Rapalas in your favorite sizes and colors. They snag, break off, and wear out with use. Test each Rapala before you use it. Make sure it swims correctly. Occasionally you may have to tune the lure by bending the eye. Test each lure before fishing with it to make sure it tracks straight.
As for the retrieve—reel your Rapala at a constant speed, and occasionally pausing or twitching the rod tip towards the lure. This causes the lure to pause and often a pause is what a trailing predator trout is looking for.
The current in a river has a say in your retrieve. On larger streams cast up and across the river, above holes and runs. Cast right into the bank. Cast into water just inches deep, or even up onto the opposite shore. When the lure enters the water next to the bank it looks like a minnow fleeing for cover, and that often attracts a savage hit. On smaller streams try casting downstream, or just drop the lure into the current, let it drift down, then reel it in so it comes alongside likely spots.
Generally speaking early morning and evening times will produce the most catches. To fish the floating Rapala on a lake, cast it out and let it sit for a few seconds. Allow the ripples from the initial splash to die down. Now give a sharp, quick jerk of your rod momentarily dipping your lure underneath the surface and creating a small splash. Now, once again allow the ripples to settle. Repeat this pattern with varying pause lengths as well as the intensity of the jerks (swim the lure beneath the surface for 6 inches to a foot before allowing it to float back to the surface; try out different distances and see what works that particular day). The topwater technique is less effective as the surface water becomes choppy. Under windy conditions or current causing rough water, a subsurface presentation will be more effective.
I hope this article helps you zero in on fishing with Rapalas. You might find yourself preferring Rapalas to all other forms of fishing for trout. I have a good friend who thinks this way and he is tough to match when fishing for browns on a river!