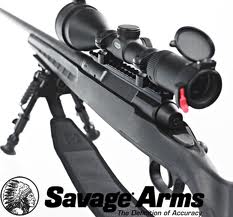 Story:
I purchased my Savage Axis in 223 after shooting with a friend who owns one. His was very accurate.
I made my purchase at Walmart for $289 + tax. Then topped it with a Vortex Crossfire II 6×18 with BDC reticle.
Now let me say if you were to buy this gun and shoot some bargain FMJ bullets out of it your results will likely not be the same.
With the 1 in 9 twist I worked up loads using Barnes 69 gr Match Burner Bullets. I found that a couple thousandths off the lands and a near max powder charge produced nice small groups.
Also the trigger is terrible on this gun. Probably 8 or 9 lbs. My buddy had a smith work his into shape but being a cheapo myself I watched a couple YouTube videos and had at it. Took me about 15 minutes and I had a crisp 2.5 lb. trigger.
Now this rifle is never going to compare to a couple thousand dollar custom job but for under $300 it can’t be beat. I think what speaks most for this rifle is that two of my friends have since purchased one since shooting mine.