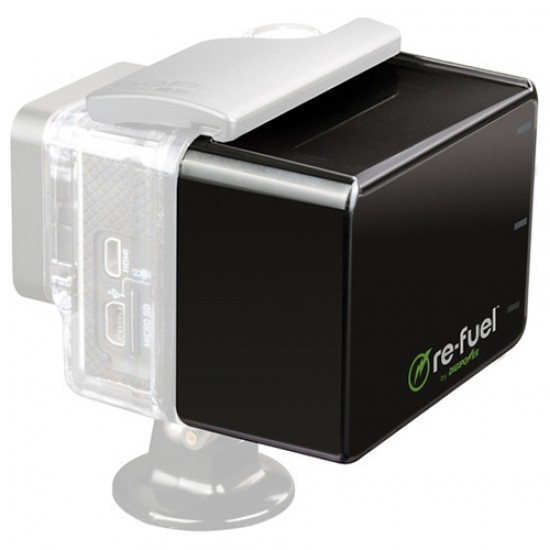 For an adventure that lasts the entire weekend, there’s the Re-Fuel 12 hour Action Pack. This GoPro battery pack is designed for the relentless explorer who doesn’t quit. Enjoy hours and hours of continuous recording on just a single charge. It’s built strong to withstand the elements and ready to handle anything you throw at it.

Easily replaces your standard backdoor in just a few simple steps.
“Shake to Read” LED battery gauge/charging indicator for information at a glance.
IP68 rated to be waterproof and withstand dirt & dust.
A specially crafted battery allows the Action Pack to work in extreme cold & heat.
Compatible with any GoPro Hero 4, 3+ and 3.

My Story:
If you have ever done any serious filming or just taken your GoPro out in an area that you cannot charge it you understand the frustration of dead batteries. A camera is nothing more than a really expensive rock if it does not have the power to actually do the function it was designed to do. So, what are us GoPro wielding people of the world to do? Well, lucky for us the good people at re-fuel have heard the call.
Sure there are plenty of battery options out there for GoPro cameras. The problem is that most of them are simply replacements to the low lifespan type that the camera already comes with. When you need to be out in the field for hours on end or you want to take your GoPro on a multi-day trip the last thing you want to worry about is having a bunch of batteries stuffed in your pack. This is where the Action Pack comes into play. It offers 12 hours of battery life in one simple package. To say that this thing is a fantastic product would be an understatement.
I belong to a group of very avid outdoorsman who are involved in quite a bit of filming. We use GoPro cameras nearly every time we go into the field and so you might guess that I was very excited to get my hands on the re-fuel Action Pack. Though this is our down time we still found a way to get the cameras out into the wild and use them for some great testing.
The first thing that we noticed with the Action Pack was that it felt sturdy and well made.
This is always a concern for us as the nature of the filming we do is almost always in extreme weather and rough terrain. The Action Pack was built to go anywhere and it is more than capable.
While testing the life of the battery we noticed that it held relatively close to the advertised 12 hour mark giving us 11:53 minutes of filming time on the first test period and slightly under that in subsequent tests. So, it did fall slightly under the advertised timeframe but it was still very acceptable. Testing was done inside the home and in mild a climate so this could change depending on weather conditions although it is advertised to be built to withstand extreme highs and lows. As for the mounting and overall functionality of the product I have to say that it was very impressive.
We tested this Action Pack on several fishing trips and around the house and I have to say that all who saw it and used it were very impressed. This is a great product and one that I see getting many more hours of use. This is an overall great idea and worth taking a look at. At a price point of only $79 it is absolutely a great buy and should be an addition to any GoPro owners gear box. Re-fuel also offers a 24 hour version of the Action Pack.

What can be done better?
The battery life came in a little short of the advertised capability but is still more than acceptable for the cost of the unit. In the end re-fuel has created a great product that I think will be responsible for some amazing filming opportunities for years to come.