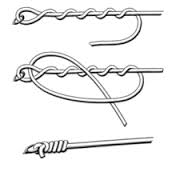 These six featured knots won’t serve your every fishing need, but each one is a proven knot with superior performance for its intended use. Understand that factors such as type of fishing line, thickness of line, season, targeted fish species, etc., all play a role in deciding the best knot to use.

ONE: THE IMPROVED CLINCH KNOT
The Improved Clinch knot is one of the most widely used fishing knots. Its main use is in securing a fishing line to a hook, lure, or swivel. The improved version includes an extra tuck under the final turn and is commonly used in flyfishing to fasten the leader to the fly. It becomes difficult to tie in lines heavier than about 25 lb test. TWO:THE TRILENE KNOT
The Berkley Trilene knot is a stronger version of the Improved Clinch. Berkley developed this knot specifically for use with its monofilament lines. In knot strength the Trilene has tested at 100 percent of the line’s original strength ( it doesn’t get any better than that). It excels for joining swivels, leaders and lures to mono and fluorocarbon. It is great for flyfishermen tying tippet and leader material to a fly. The Trilene is especially easy to tie with lighter pound tests. THREE: THE PALOMAR KNOT
The Palomar Knot may be the easiest knot to tie and its knot strength is typically among the highest performers. When used for joining superlines to leaders or lures, the Palomar Knot has few equals. It is the knot to use when fishing superlines; it also works well with fluorocarbons.

HOW TO TIE THE PALOMAR KNOT
1. Double about six inches of the main line and run it through the hook eye
2. Double the loop back and make an overhand knot around the doubled line, leaving a loop large enough to pass the hook or lure through
3. Pull the loop down and around the entire hook or lure
4. Moisten and cinch tight by pulling both ends of the line FOUR: THE SURGEON’S LOOP KNOT
The surgeon’s loop knot is essentially a double overhand knot that forms a loop with excellent strength. You use this knot when attaching leader to a swivel, or when forming loop-to-loop connections between two dissimilar types of line. This knot is very reliable and so incredibly simple to tie that it almost
becomes a necessity.

HOW TO TIE THE SURGEON’S LOOP KNOT
1. Double the end of the line and tie a loose overhand knot.
2. Pass end of loop through the knot again.
3. Hold the standing line and tag end and pull the loop to tighten the knot. Clip tag end close.

FIVE: THE BERKLEY BRAID KNOT
The Berkley Braid Knot is a great overall choice when using superlines; it works wonders with monofilament and fluorocarbon fishing lines as well. This is an
uncomplicated knot with champion type performance when tested against other knots for strength and utility. SIX: THE UNI KNOT
The Uni is stellar for joining lines of relatively similar diameter, for example, adding a monofilament or fluorocarbon leader to your superline mainline. Why? Well, to combine the low-visibility and easy-casting properties of fluorocarbon with the phenomenal sensitivity and pulling power of superline.
The Uni to Uni preserves up to 90 percent of line strength, is an easier tie, and is a stronger connection than either the Surgeon Knot or Blood Knot. (If you need to join lines of vastly different diameters, I suggest the Albright Knot.)

HOW TO TIE THE UNI TO UNI KNOT
1. Overlap the end of the leader material and main line about 6 inches
2. Bring the tag end of the main line toward the middle, forming a loop
3. Using the same tag end, make 6 to 8 turns through the loop and tighten by tugging on the tag end
4. Repeat steps 2 and 3 with the leader material
5. After moistening, pull the standing lines in opposite directions to bring the knots together

There you have it! Six knots that are easy to learn and dependable when a fish is on the line.
As a general maintenance rule, be meticulous in crafting the knots as described and demonstrated. Store your lines in doors and out of dramatic temperature fluctuations. When your rod and reel have sat a long time, peel carefully examine and trim the line before attaching a hook, swivel, or fly. If you have had a good day of fishing, catching several fish on the same rigging, spinner, or lure, cut it off, trim a couple of line from the tag end, and reattach. This ensures that wear and tear, abrasion, fish teeth, etc., don’t weaken your line and cause you to break off on the next hook up.
Happy fishing!