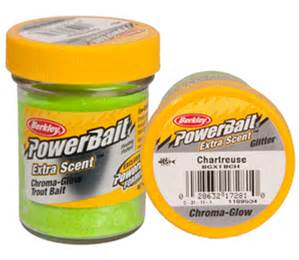 5 Ways to Improve Your Results with PowerBait

You hear they’re hitting on PowerBait. You run to the store and pick up three or four jars in the colors that whisper to you as “the most fishy.” What else is there to know? Hey, knowing they are hitting on PowerBait is just the tip of the iceberg when it comes to translating that information into fishing success of your own.

1. Get out at the right time of day (for the season).
One of the very best techniques to take summer trout on a lake is to get up and be on the water early early in the day. Fish will cruise the shallows and surface in low light. The best fishing will be over by 9 am. Trout move deeper in the water column to seek out cool water as summer sets in and surface waters warm. Trout often inhabit depths around the thermocline, the transition between the warm, oxygenated surface layer and the cool, low-oxygen lower layer. That’s a good reason to vary your depth until you figure out where the fish are holding.

2. Floating or sinking?
Are you rigging to catch fish close to the surface (for example, behind a bubble); or are you throwing long and letting it sink to the bottom? PowerBait floats, so even when you sink it, leave a little leader material between the weight and the hook so the bait can float up off the bottom above your sinker. Obviously, if you’re fishing for bottom feeders you want the PowerBait to stay on the bottom. Don’t be afraid to play around with different rigging configurations until you find the one that works best for you on your favorite water.

3. Don’t skimp.
Do I even need to say it? Yeah, that little bottle of PowerBait is kind of spendy, but that’s just sort of the way it works when you are using PowerBait. You don’t do yourself any favors by skimping along so the hook is scarcely covered. Put a big enough plug on the treble hook to cover the hook adequately. Try different colors. Try mixing colors. Try the glitter baits and mix in a little of that, too. C’mon, loosen up and have a little fun with it.

4. Hook size, and clipping off one of the tines on the treble hook.
When fishing for trout on a lake, many people recommend smaller size treble hooks, as small as an 18. I don’t like to use treble hooks that small because the fish swallow them and there is simply no way to get them out without killing the fish. If you’re keeping everything you catch, then a small hook is not a deterrent. For trout fishing I recommend a treble hook in a size 10, 12, or 14.
I like to snip off one of the tines on the treble hook to simplify getting the hook out after the hook up. Exercise a little caution to not damage the other tines of the hook in cutting one off. PowerBait will adhere to the two-pronged hook just great.
Never try to catch and release a fish that swallowed PowerBait. When a fish swallows a treble hook, don’t jerk and tug on the line; that is sure to cause damage to the fish and it is unlikely to survive. If you don’t want the fish, cut off the hook and tie on a new one. You at least give the fish a chance to survive.

5. Consider using a braided line.
These lines are more expensive and you will want to use the Palomar Knot when tying them on. They are 10 times stronger than steel and they don’t stretch, providing great sensitivity. That means you feel the bite when the bite is happening. With PowerBait, that means you can set the hook when the hook is in the fish’s mouth instead of its stomach. That is good news for you if you are releasing fish, and if you’re a fish I’m thinking it is always better to be caught in the mouth instead of the stomach. Ha!
There you have it: 5 ways to improve your results with PowerBait. Happy Fishing!