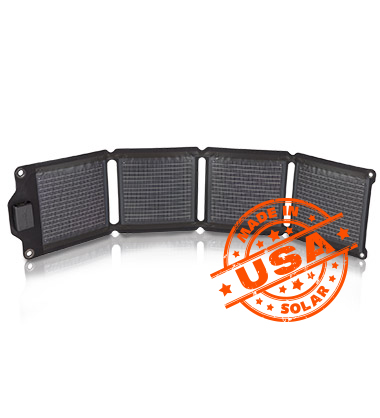 The EnerPlex Kickr IV™ is a flexible, super-durable, and lightweight 6.5 watt portable solar charger, powerful enough to charge mobile electronics at the same rate as a wall outlet (under Standard Testing Conditions)
• Weighs only 0.6 pounds
• Weather Resistant
• Easily foldable
• Solar made with flexible and rugged panels My Story:
We live in an age where we can send robots to Mars. So why shouldn’t we be able to harness the power of the sun to charge our devises? Why would I need to charge my phone while hunting or backpacking you might ask? Well, the answer is far more simplistic than the science behind this product. Weather hunting or hiking documentation is an important part of the experience. Pictures and video help us to relive and share our experiences with others. The problem that is ever present with electronic devices such as phones, cameras, goPRO, ext. is battery life. While these are a great tool and wonderful they are nothing more than added weight if not charged.
How many times have you opened your pack only to find that some mystery spirit had magically turned on your phone leaving you with nothing more than a fancy looking paper weight? If this has never happened to you count yourself among the lucky ones. I myself experienced this during a late mule deer hunt and after I was lucky enough to shoot the best buck of my life I was crushed to find my phone had turned on in my pack, or was left on, and was as dead as my trophy. I was able to use a friend’s old school camera and get a few pictures but they were sub-par at best. Why do I put so much emphasis on phones? Because they are like mini computers. New phones have amazing cameras and better still they have the ability to edit, share, and create albums that fit into a pocket. The technology is amazing and can really allow you to document a hunt in a way that a camera alone cannot. But that is enough about that let me get back to the real reason for this post
The sun is a marvelous thing. To list the many great powers of the sun would take far more time than I have today. So, let’s focus on just one. Energy. The sun has it in spades. The problem is harnessing that energy in a useful way in relation to the aforementioned devices. Solar panels are nothing new. They have been around for many years. They are blocky, heavy, fragile, and otherwise impractical for outdoor enthusiast carrying their camps on their back and ever conscious of weight. The EnerPlex Kickr IV has solved all of those problems with one little device. They have created a rugged light weight panel that can be fixed to just about anything. It can be placed on the outside of a backpack, a tree, a horse, a Minotaur, anyway, you get the idea. It comes with a verity of elastic bands that feed through the 4 holes on the top and bottom of the fold out panel. This allows you the versatility to attach it to nearly anything.
I recently received my EnerPlex Kickr IV which I paired with a JUMPRmini power bank. It was just before the opening rifle elk season in my home state of Washington. I was to accompany my good friend to his camp and be his spotter as I am primarily an archery hunter. After checking my gear and putting together my pack I was anxious to try my new solar charger out. I fixed the panel to my pack and plugged it into the JUMPRmini. A day of hiking around taking pictures with my phone proved taxing on the battery and by nightfall it was nearly dead. Anxious to test out the power of the solar panel I pulled out the battery pack, which has indicators that told me it was fully charged. I plugged in my phone and was delighted to hear the quintessential “bong” and watched as the power bar turned green indicating the phone was now charging. By morning the alarm on my phone was loud and annoying and after I wiped the sleep from my eyes I turned to find my phone sitting at %100. A great success! The charger had worked flawlessly. Another day was beginning and I had a fully charged camera to document the journey and a lucky thing it was too. My good friend Jordan and his cousin were both rewarded with fine opportunity and capitalized on it leaving them both standing over healthy spike bulls. The pack began and the pictures were plentiful. That night was spent in celebration and as we all sat looking back through the pictures I was glad for my new EnerPlex Kickr IV and the gift of power as it allowed us to relive the day through the many pictures I was able to take. This truly is a fantastic product. O, and I forgot to mention it is made in the great U.S. of A.!!!

Summary:
This product just works. It is technologically complex but so simple to use. The design is great and it is rugged. Some might say it would be nice to not have to use a power bank and to have that built in but I actually like the idea of not having it built in. I can charge more than one bank and never have to fear that it may fail rendering the entire unit useless. If a supplemental bank were to fail you could just replace it and still have a fully working charging system.

What can be done better?
The only thing I could see anybody wanting is more color options. But that has nothing to do with how the product functions. It truly is a great piece of equipment and an asset in the field.