Decisions Decisions, How One Hunter Decided on his Rifle for Deer Hunting.

Thirty three years ago when I began deer hunting I started with one double barreled L.C. Smith shotgun. Things were simple then. If a deer came within 40 yards, I would shoot it. As I grew and became attuned to the surrounding environments, my hunting style changed as well did my need for multiple guns for multiple applications. Fast forward to this past hunting season. After scouting the areas which I would be hunting I realized that I would need two different rifles for the two types of hunting which I would be doing. Several of my stands would require a shooting to a maximum distance of 300 yards. Other stands would require much shorter shots, shooting around and on the edge of very thick cover. The maximum distance from these stands would be 120 yards and as close as under my tree.

Thinking through these different applications I decided to apply two very different, but extremely effective rifles for the season. For the longer shots I chose a Pre-64 Model 70 Winchester in the .264 Winchester Magnum caliber built in 1960. The gun is one of the flattest shooting rifles ever made and delivers tremendous knockdown power. The shorter distance and heavy covered areas would require a heavier bullet. The answer was the classic 30-06 caliber, also in a Pre-64 Model 70 Winchester built in 1951. A classic, need I say more!

The next decision in the process was to decide which scope to mount on each rifle for the particular application of use. For the 264 I selected a Leupold Vari-X-3 6.5-20 x 40mm with a fine duplex reticle. ( An in-depth of each scope will be written up at a later date). This scope would enable me to place precision shots over a long distance within a relatively short reaction time period. The 30-06 was topped with a Swarovski 4-14 x 50mm with heavy duplex crosshairs. The larger objective and heavy duplex combination would allow me to hunt very thick cover by allowing me to go right up to the maximum legal shooting light. I would actually need a greater light gathering scope on the ’06 due to hunting dense dark woods, as opposed to hunting the more open applications of the 264 combined with the Leupold.

Deciding on the most effective bullet combination for each rifle was the next step in the process. On the 264 I was lucky right out of the gate! I had been doing research on factory ammunition and had decided to try the Nosler Custom Trophy ammo. Your choices are pretty limited when looking for the 264 caliber in

factory cartridges. Nosler, Winchester, and Remington were the only available factory rounds which I could put my hands on at the time. After reading reviews of each, I decided to give the Nosler the first opportunity to prove itself. Since I hand load 90%of my ammo, I am very skeptical of factory ammunition. The performance form the Nosler Custom quickly changed my mind! The cartridge is topped with the Accubond 130 grain bullet which can tackle anything in my neck of the woods and then some. Out of the gate my first 3 shots at 115 yards were less than .25”! Wow! I ran the next test at 180 yards and a final test at 250. The ammo exceeded my expectations in performance. In my rifle, a 130 Accubond zeroed at 250 yards, placed my bullet 2.5” high at 115 yards and 1.5” high at 180 yards. The gun shot a sub 1” group at 180 yards and a 1.5” group at 250 yards. 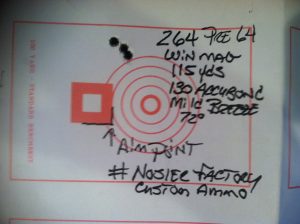 The information on the box from the factory details the muzzle velocity at 3,100 fps. Chronographing this round, I found it to be a bit faster than the factory specifications. My model 70 .264 has a 26” barrel (which I recommend for several reasons in this caliber specifically relating to faster velocities than the 24” and 22” models, as well as the reduction of flash exiting the barrel in lower light conditions), that produced a muzzle velocity of 3,216 fps. Needless to say, I had my 300 yard rifle, scope an ammunition.

Next I began developing a hand load for the 30-06. I have been a fan of Barnes bullets for a long time. The all copper TSX bullet performs great in just about everything I load from my .222 to my 375 H&H. I began with the 165 grain TSX bullet and ran 3 test loads with IMR 4064 at 46.5, 47.5 and 48.5 grains. The tightest group of the 3 was the 47.5 grain load. From there I tested 2 additional loads by adding or subtracting .5 grains in order to dial the rifle in. The winner was 47.0 grains. At 115 yards the four shot group consisted of one big hole. I had found my rifle for hunting the creek bottoms and thickets. 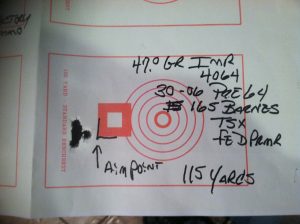 What would I do differently about making the selections / decisions and how could I improve the process?

1) My Swarovski 4-14x50mm is an excellent piece of optic equipment. However, due to the need for as much light as possible when making an ethical shot in the last few minutes of legal light, I would replace scope with a 3-12x50mmSwarovski or a 3-12x56mm Zeiss. Both of these scopes have tremendous clarity as well as a 30mm tube which increases the amount of light transmitting to you eye.
2) I would develop a back-up round for the 264 with a hand load. it is more economical and I do not have to worry if the stores have the factory ammo in stock.