Fits in most water bottle pockets 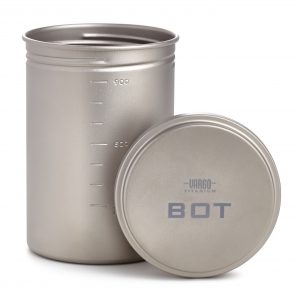 When I first saw the BOT I had some concerns and intrigue.  Here is a very lightweight, titanium pot for backpacking that is large enough for cooking meals in, or heating enough water for two people, but it was also water tight and is intended to be doubled as a water bottle.  Most cooking equipment for backpacking is not typically water tight as this is not needed.  The BOT uses a heat resistant o-ring on the lid to seal the pot up when being used as a water bottle.  When cooking with the BOT the lid is placed upside down,  the threaded portion with the o-ring is placed up and exposed.  This allows for steam to escape as needed.  My main concern about the BOT was this o-ring.  Would it really hold up and not melt when placed in on the edge of a campfire or on a cook stove in the configuration intended for cooking.  I needed to take it out and give it a test.  I wanted to see if the BOT would live up to the expectations and claims.  I can tell you I have not been disappointed.  When packing the best piece of equipment is one that has many uses, eliminating the need for carrying additional items and weight. 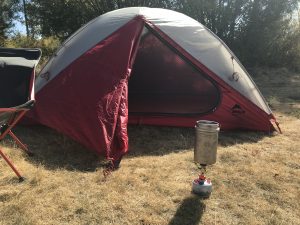 I took the BOT with me on several trips.  I wanted to see how it performed and how well I would like using it in a variety of different situations, and different environments.  I first took it on a pack trip in the Blue Mountains of eastern Washington.  Now I am typically one that likes to hike with a hydration system for carrying water, but for this trip I took the BOT as my water bottle. I wasn’t going on a very long hike, so I figured it would be more than enough, and I needed to see how well it worked all around. It worked great on the trip in.  It carried a liter of water, was easy to access, lightweight and saved a little room on the inside of my pack by doubling as my cook set as well.  I made one large mistake by making this my only water bottle however.  When it came time to make food, I did not have anything else that could hold water, or provide me with something to drink out of until I washed it.  I had to “borrow” water from friends while the BOT was in cook mode.  For future trips when using the BOT as a water bottle I will be sure to also carry a second water bottle for convenience.  I will say that it performed as intended.  It was great for warming water and for actually cooking food in.  Flipping the top and having the o-ring exposed did not cause a single issue.  My worry about the possibility of the BOT betting to hot and causing damage to the ring passed and faded fairly quickly. 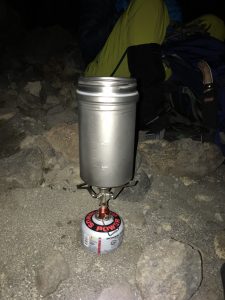 The next trip I took the BOT on was a hike to the summit of Mount Adams in western Washington.  Mount Adams is the second highest peak in the state.  Making a one day trip to the top and back down was an exhausting feat some friends and I decided to undertake.  Towards the top each step that we took was a tiring exercise in pure determination.  Packing the necessities for the trip and having them be as light weight as possible was a must.  For this trip I used the BOT as a cook pot only, and carried a separate hydration pack for water.  I wanted to be able to store the pack stove and fuel canister within the BOT to save room in my pack.  I also wanted to be able to use the BOT to boil snow/water and store it as additional drinking water if needed during the trip.  Just before daylight, we all stopped approximately halfway to the summit to eat and take a much needed break before we tackled the glacier.  I pulled out the BOT heated enough water for my dehydrated meal and to make a hot cup of coffee.  While waiting for my meal to hydrate, I passed the BOT around among the four of us so everyone could enjoy the warmth and delicious goodness that resided within.  Feeling the heat of the water through my thin gloves helped take the chill off from the predawn cold wind that was biting at us.  After finishing the coffee I packed the BOT, stove and fuel back into my pot and continued the second half part of the journey to the summit.  I believe I made the right choice in taking the BOT as one of my carefully chosen pieces of equipment for this journey besides it functionality it gave us all a great moral boost before the push to the summit.

A month after climbing Mount Adams I took the BOT with me to elk camp on a hunting trip.  This was a car camping trip so I was able to take all of the equipment that I wanted.  I chose to include  the BOT on this adventure because it was becoming one of my favorite pieces of equipment for its versatility.  I started out using it around camp to heat water for a French press coffee pot.  It held the perfect amount of water needed for making the liquid energy and was so easy to use.  I also wanted to use the BOT as one of my reusable water bottle for hiking around that if needed in an emergency would be a life saving tool for survival.  After one hunt of using the BOT for a water bottle I quickly abandoned it for that use.  The Titanium lid and pot made a squeaking noise when being screw on and off.  I needed something more quiet when out hunting.   The sound of metal on metal is not exactly a natural sound in the woods and would surely alert any animals within a wide berth of my presence.  I didn’t completely abandon the BOT after that hunt but it did get buried deep in my where it carried extra water and the piece of mind that I had it if I needed it.

This is one piece of equipment that I can tell you I will be taking with me on my excursions in the future.  I have been very impressed and happy with the versatility, durability, lightweight construction of the BOT.  Whether you are counting ounces, tight on space, or just want a great piece of equipment that has multiple uses on a trip, the BOT should be something you consider to take with you.  I am excited for the next adventure that it will be joining me on.

What Could Be Done Better:

I would give the BOT 5 stars

The only thing that I would like to see different about the BOT, would be the addition of some form of an insulated cover for when holding the BOT it hot liquid inside of it.  The titanium transfers the heat phenomenally well which makes it a little difficult to hold without some for of a hot pad.

Johnny is a life long enthusiast of the outdoors. His passion and background have lead him to experience the outdoors from a multitude of adventures. You will typically find him hunting, fishing, backpacking, or hiking somewhere in the world unspoiled. If you liked his review please comment below.