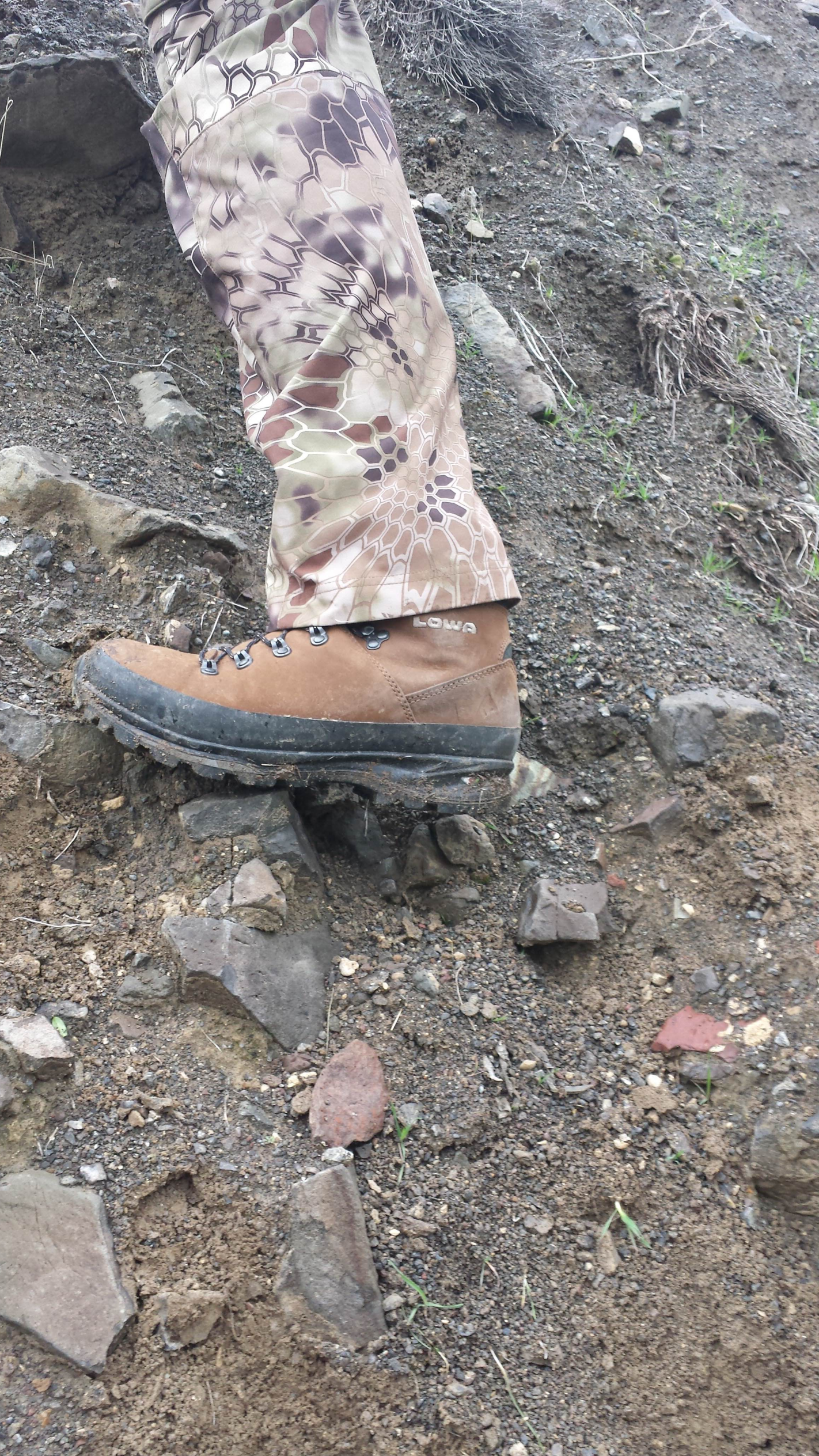 After each season I usually sit down with all my gear and do a PMCS (Preventative Maintenance Checks and Services) to see what needs to be cleaned, repaired, or replaced. After the inspection I start the process of getting my inventory all back to a level the meets my standards and that is ready for the following season. This year was slightly different in that I had the fortune of starting my PMCS knowing that the boots I had were new and in perfect condition.

I contacted LOWA Boots early in the season and after hashing out a few details I was sent a new pair of the Ranger II GTX Trekking boots. The boots came in short order and soon wrapped my feet in style. On first inspection of the boot I noticed that it was very handsome. The Nubuk leather looks stout as does the full rubber rand that tucks into a bullet proof Vibram sole. The top of the boot is dark forest green and padded and looks to be of high quality material. The boots tongue is well padded and is just slightly higher that the top of the boot helping to protecting the shin as the foot rolls forward. Overall this boot looks tough, it looks sturdy, and it flat looks good.

I will admit I was a bit apprehensive about it being a shorter boot. I typically try and stay with the 9 inch type boots as that is what I have grown accustomed to from my time in the Army. I also had a substantial injury to my foot that has kept me always searching for well supported boots. Whatever the reason I am not big on change and this was a change indeed. I sat in my favorite chair and slipped my feet into the boots and tightened them up. I instantly noticed that the quick lace system which incorporates small ball bearings allowed the laces to flow effortlessly through the eyes and afforded me a very nice tight fit. The boots were on now and it was time to do some walking.

As many of you must know hunting boots are often times also work boots, walking boots, heck sometimes even dress boots. The point is we don’t always get stuck wearing them solely in the field. Sand, dirt, mud, rocks, and concrete/hard pack all have a different feel to them and some boots are better suited for one than the other. I wanted to test the boots in both the urban and field environments. The reason for this was simple sometimes you have to come out of the hills for a few hours and walk around town. Well, I was ready to put these Rangers to the test. I had tickets for the NFC Championship game in Seattle and thought this was a perfect opportunity to not only test the comfort of the boots on concrete but also check the waterproof ability as it was, like usual, raining in Seattle that day. My day started at 6 a.m. and with the exception of an hour drive to the stadium I’m not sure my butt hit a seat for the next 8 hours. I was walking, jumping, if you watched the game you know I was pacing, I was shifting weight, and in the end dancing. To sum it up I was really putting a beating on my feet and my new boots. I can tell you not once did I give notice to my feet as they were dry and happy. My urban assault had been a success and the boots passed.

The Seattle adventure was dual purpose and I would be lying if I told you it was not my intention to use that as a break in period for the new boots. They are a very robust boot and though insanely comfortable I was not ready to take them to the hills without a few days of break in. The time to get them off road came the following week on a two day coyote hunting adventure. The breaks of the Snake River are what I like to call “Man Makers”. They are steep and unforgiving. They also hold a healthy population of an assortment of animals. Luckily, coyotes are on that list as they were the focus of my trip. Stand after stand we walked. It was a trek of hard miles and long hours, up hills and down valleys. I walked over plowed fields, basalt cliffs, rock slides, and sand dunes. To say I put the boots to the test would be obvious and redundant. I mentioned earlier that I was apprehensive about the shorter boot and my old injury. My feet are not as sure as they once were and believe me when I say I need a good boot with good support. Well, this was it! This was the time to see if these LOWA Ranger II boots could hold me up and they did so perfectly. The shorter boots are slightly lighter than those I have worn in the past which helped with fatigue. In the end my feet were as happy as if I had been lounging around the house in my night slippers. The Ranger II GTX’s are truly a great boot. After walking around sharp rocks, thick clay mud, and grinding sand the boots show little sign of wear and lead me to believe they will stand the test of time. So to sum it up in my personal PMCS these boots get a big check mark of approval and are ready for next season absolutely!

What could be done better?

As with nearly all boots the stock insoles leave much to be desired. I replace them with my own brand of choice and recommend you do the same. This is really an unavoidable step that is by no means brand specific and is not a ding to Lowa. The only thing that they could do after that is put two pairs in one box because you will be hooked after you wear these boots. They truly are a great pair of boots.