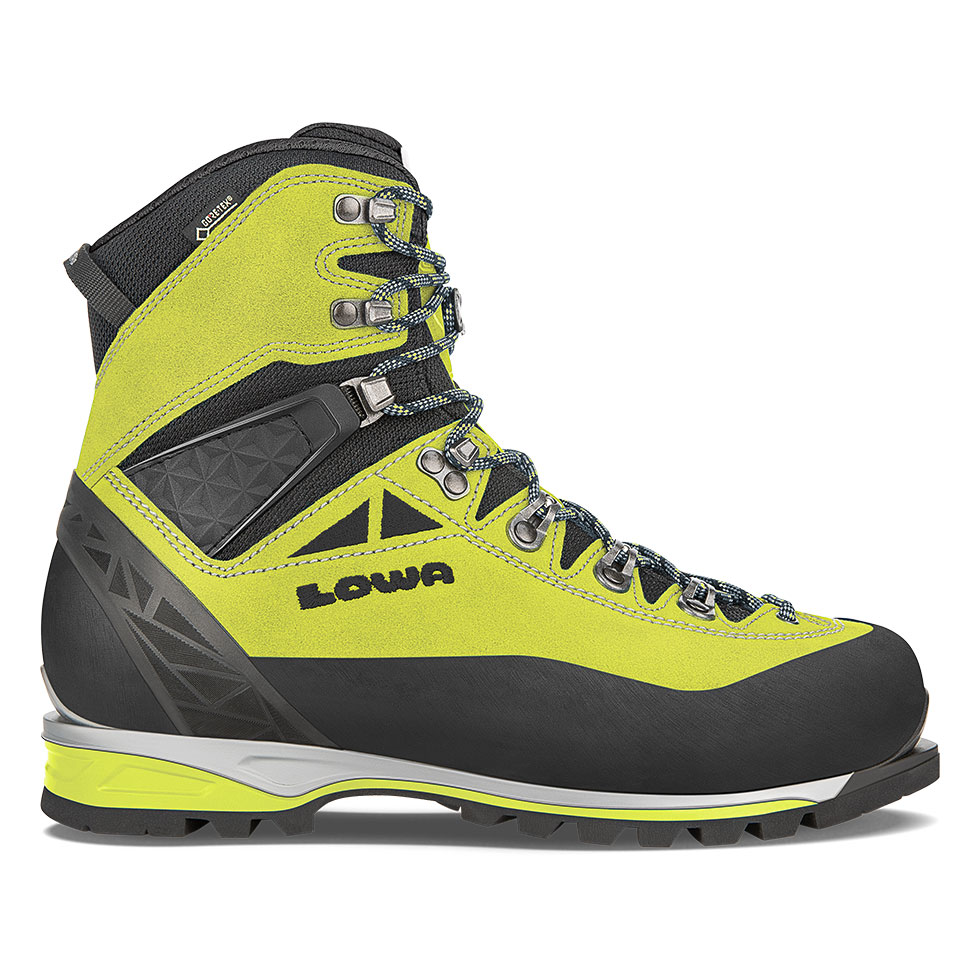 A new take on a versatile all-around alpine boot, this insulated model’s design balances flexibility with durability, and excels in both hiking comfort and climbing performance. The Fit Wing features allows for easy ankle articulation, making it ideal for heavy backpacking trips as well as for mixed climbing. Automatic crampon-compatible. Durably waterproof/breathable. 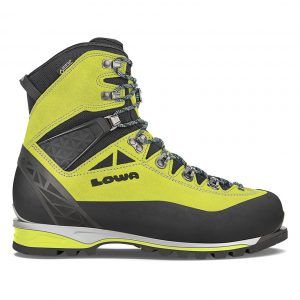 In the interest of transparency I must admit that I have had a long standing love affair with Lowa boots starting in 2003 in the midst of an Appalachian Trail thru-hike at the time. At the time a pair of Lowa Tempest, a brand and style of shoe that continued to see me through many thousands of trail miles over subsequent years. Unfortunately for the hiking world, Lowa discontinued this line of hikers several years ago.

Around 2007, I included climbing mountains on the list of things I was willing to do outside. It made for a convenient cross over sport to pair alongside hiking as much of my current gear would carry over. The one glaring exception being footwear.  Hiking boots, no matter the style or construction, simply will not cut it when it comes to bagging peaks.

When considering footwear for mountain climbing there are many factors brought into the equation. Ultimately, you may have to make a few compromises to find a boot that will work for your needs.   When I first started climbing I wanted to be light.  In order to be light I sacrificed insulation and a stiff sole. These sacrifices allowed me to walk approach trails in comfort; but as a result I suffered through cold and often wet feet at altitude. The lighter boots, without rigid soles also made climbing with crampons difficult.  I then switched to a non-Lowa boot that was insulated, had a very ridged sole, and was made with waterproof material.  After a long day of climbing my feet were dry, but blistered and sore from the ridged sole not allowing my foot to move with the terrain. I knew that I needed something better.

In Preparation for my Mt. Rainier summit attempt I received the Lowa Alpine Expert GTX.  The first thing I took note of was the quality and craftsmanship that Lowa puts into each and every product they make.  Every seam and every stitch is without fault.  As with all of my boots, I removed the standard insoles, and replaced them with a set of Superfeet Wide Green, a practice that reaches back to my Appalachian Trail thru-hiking days. With the combination of closed hooks on the bottom, open hooks on top and Fit Wings in the middle I was able to tighten the boot nicely on each foot.  Lowa is well known for out of the box wearable boots and these did not disappoint.  Prior to my climb I put approximately 40 training miles on these boots, never suffering from blisters or hot spots.

After wearing these boots on my nightly hike for about a month I was very confident in tackling something more extreme. I was ready for my first official test and it was set to be a good one. We had planned a late July climb of Washington State’s highest peak, the 14,411 foot summit of Mt. Rainier.  My route would take me up the largest glacier in the lower 48, the Emmons, and would involve prolonged periods of time on snow and ice with extensive use of steel crampons. I knew I had the right boot for the job and because of Lowa’s reputation for out of the box comfort, and my own experience with other styles of their hiking shoes, I chose to forgo any type of approach or camp shoe.  I was committed to wearing these boots for the entire 3 day hiking/climbing trip. 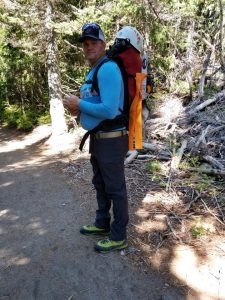 The complete approach was approximately 6 miles, starting with a combination of well-groomed hard pack dirt and mixed rock near numerous stream beds and ending with a long climb up the Inter Glacier and then a short traverse of the Emmons glacier both of these with the aid of crampons. The Lowa Alpine Expert GTX Vibram sole performed very well along the hard pack dirt and mixed rock.  I had confident steps, experiencing little to no slippage while carrying a pack weighing around 25 pounds.  The rigid soles were noticeable but not uncomfortable. 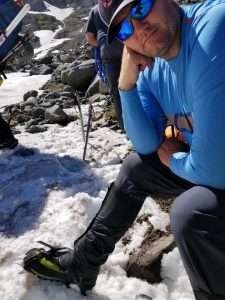 For this climb I had chosen a pair of steel Black Diamond strap-on crampons, the crampons fit well on the boots and I had zero issues with movement while wearing them. 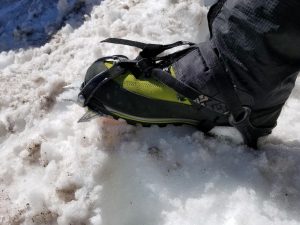 The climb up Mt. Rainier began at 1230AM at 9,400ft on reasonably firm snow with air temperatures around 40 degrees.  At 12,500ft the temperatures dropped below freezing and my Lowa Alpine Expert GTX’s remained dry and warm. Our team made it to the 13,500 foot Liberty Cap Ridge before one of our teammates began to show signs of altitude sickness, thus sadly, ending our climb just shy of our goal. Safety comes first when you are climbing and though we all desperately wanted to reach the top it was not worth risking injury or death by leaving someone behind. It was painful decision but we started together and we intended to come down together as well. 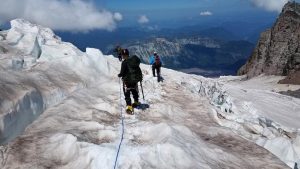 During the decent, the sunrise brought an increase in temperatures and the snow started to turn into a slushy mix, often sinking above the laces.  In the past, under these conditions, with prior boot choices, I would have had wet and cold feet.  Our climbing team returned to Camp Schurman just past noon after spending nearly 12 hours on North facing side of Mount Rainier my feet remained dry and comfortably warm thanks to the high wall rubber rand, the GORE-TEX lining and the PrimaLoft 400 gr. Insulation. 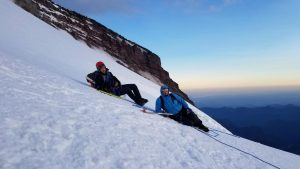 After packing up camp, we headed down the remainder of the mountain towards the trailhead located at White River Camp Ground. My time on travelling across snow and glaciers was not complete, as I once again traversed Emmons Glacier and climbed the small rock face on to Camp Curtis. Forgoing my crampons, the Lowa Alpine Expert GTX’s made short work of the small rock climb up and over Camp Curtis. The “close to the rock” foot well kept my climbing confident during the short amount of hand over hand climbing that was required, as the glacier gave way to solid rock wall.  Our team regrouped and we began glacading down the vast majority of the Inter Glacier, leaving about a 4.5 mile walk to the trailhead. This time in a decent, travelling over the same mixed rock and compact dirt trail.  On the decent, I had excellent traction as the heal break kept me from slipping, in even the most rocky sections. 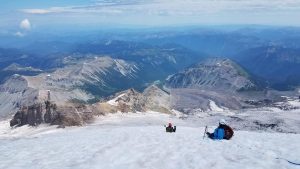 With a total trip length of 19.5 miles covered over 3 days with an elevation gain/loss of just over 20,000 vertical feet these boots kept my feet warm, dry and blister free.  I left Mt. Rainier feeling confident and ready to tackle another climb in my Low Alpine Expert GTX boots.

Not much.  I found these boots, as expected, to be great right out of the box.  I did struggle with getting the strings to laces to load into the open eyelets of the Fit Wings, but once in place the strings remained tight and gave excellent support.  This probably has more to do with my lack of eye hand coordination than a design flaw.

I cant give these great boots anything other than the 5 stars they deserve. They served me well and I expect they will continue to do so for many climbs to come!