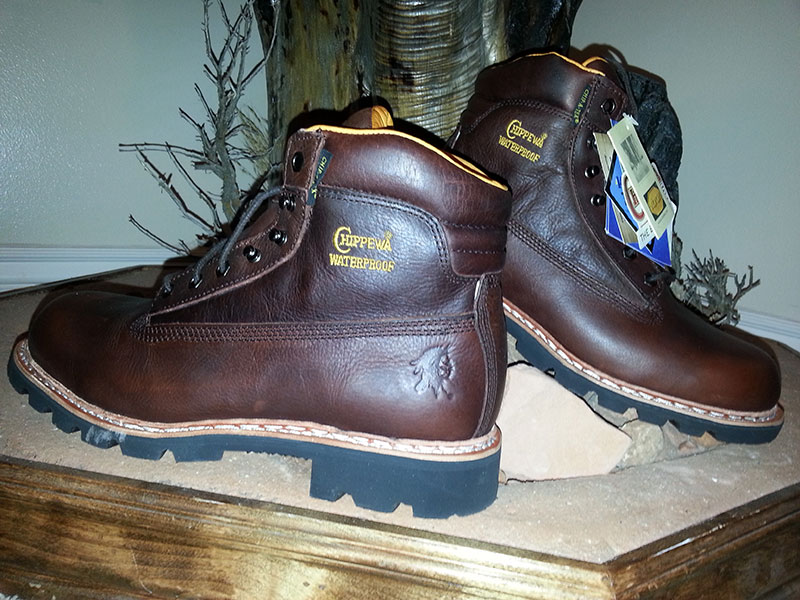 Chippewa makes a rugged waterproof insulated boot that is comfortable and provides great ankle support.  The heavy duty tread on the Vibram outsole that helps reduce slipping even on wet surfaces.  It is a great boot for heavy duty use!

The Chippewa 25945 waterproof insulated Lace-up work boots are made of Briar Oiled Waterproof Leather on the outside and come with a Chip-A-Tex Waterproof Membrane and waterproof footbed on the inside to keep your feet nice and dry.  The Thinsulate™ Ultra keeps your feet toasty warm. To provide comfort, the boots come with a removable cushioned orthotic with a T-Bar Cushion Collar and a Bontex Insole Board for comfort. The Vibram Outsole provides solid slip resistance when walking around on wet surfaces.

These boots are made to take a beating and still provide great support while keeping your feet dry and toasty warm, even on the coldest work days.

The iReviewGear.com team, considers this boot a BUY, and an outstanding boot that will last for years! Being outdoors a ton this time of year, I wanted a boot that could provide great footing without any slippage.  The weather in Utah in November can get wet as the snow starts to fly on a regular basis, so I wanted a boot that would also be waterproof and keep my feet dry while I am out and about.

When I first opened the box that contained the Chippewa 25945 boots, I was immediately impressed with the craftmanship of the boot.  Looking at the boot I noticed several things:

As I slipped the boots on for the first time, I definitely felt the benefit of the orthotic insole.  The boots are very comfortable to wear and to work in.

Other boots I have worn don’t have a good design at the top of the boot and can rub against your lower calf.  These Chippewa Boots did take a little bit of time to get broken in for the upper portion of the boot.

I have worn the boots for a couple of weeks now with excellent results.  They have great traction – I haven’t noticed any slipping as I have worked and hiked.  The orthotic insole makes the boot very comfortable to wear and I haven’t had any problems with blisters or chafing and as I broke the boot in while working, hiking and wearing the boot over several weeks.  During the review period, it has rained and snowed several of the days that I have been wearing them and the boots have kept my feet dry and warm during those days. I have not submerged the boots to determine how waterproof they are, but will update my review when that opportunity arises.

Chippewa was founded in 1901 and were named after the city of Chippewa Falls, WI and corresponding Indian tribe in the region.  Chippewa Boots began by producing high end logging boots for the pulp and paper industry and thousands of lumberjacks relied upon their Chippewa boots in addition to their sharp saws, honed axes, and strong ropes to do their jobs.  The quality of the Logger boots created a demand for Chippewa boots for outdoors use and the factory produced over 2,500 pairs of boots a day in 1910!

Chippewa Boots have the motto of Chippewa Boots, “The Best. By Far.” and the company is known for quality, durability and leveraging technology to create rugged and well made products for work and play.

What Chippewa could do better:

The Chippewa Briar 25945 boots are a little heavy weighing in at 5 lbs combined weight for the pair.  It is a tough balance, because you want heavy duty boots, but want them to be as light as possible.

The other issue was a slight issue having to do with matching.  One boot had a lot more grain than the other – not that big of a deal, they are a good looking pair of boots, but with the attention to detail for the other elements of the boot, I would have expected the boots to match a little more closely. The Chippewa 6″ Briar 25945 boots are well made, waterproof and comfortable.  They provide great ankle support and have heavy duty tread on the Vibram outsole that helps reduce slipping even on wet surfaces.

Dave Crowther enjoys spending time outdoors with his family - at the lake, in the mountains, on the trail, or bbq'ing in the backyard. He has been a Scoutmaster for over a decade and loves finding new places to explore!