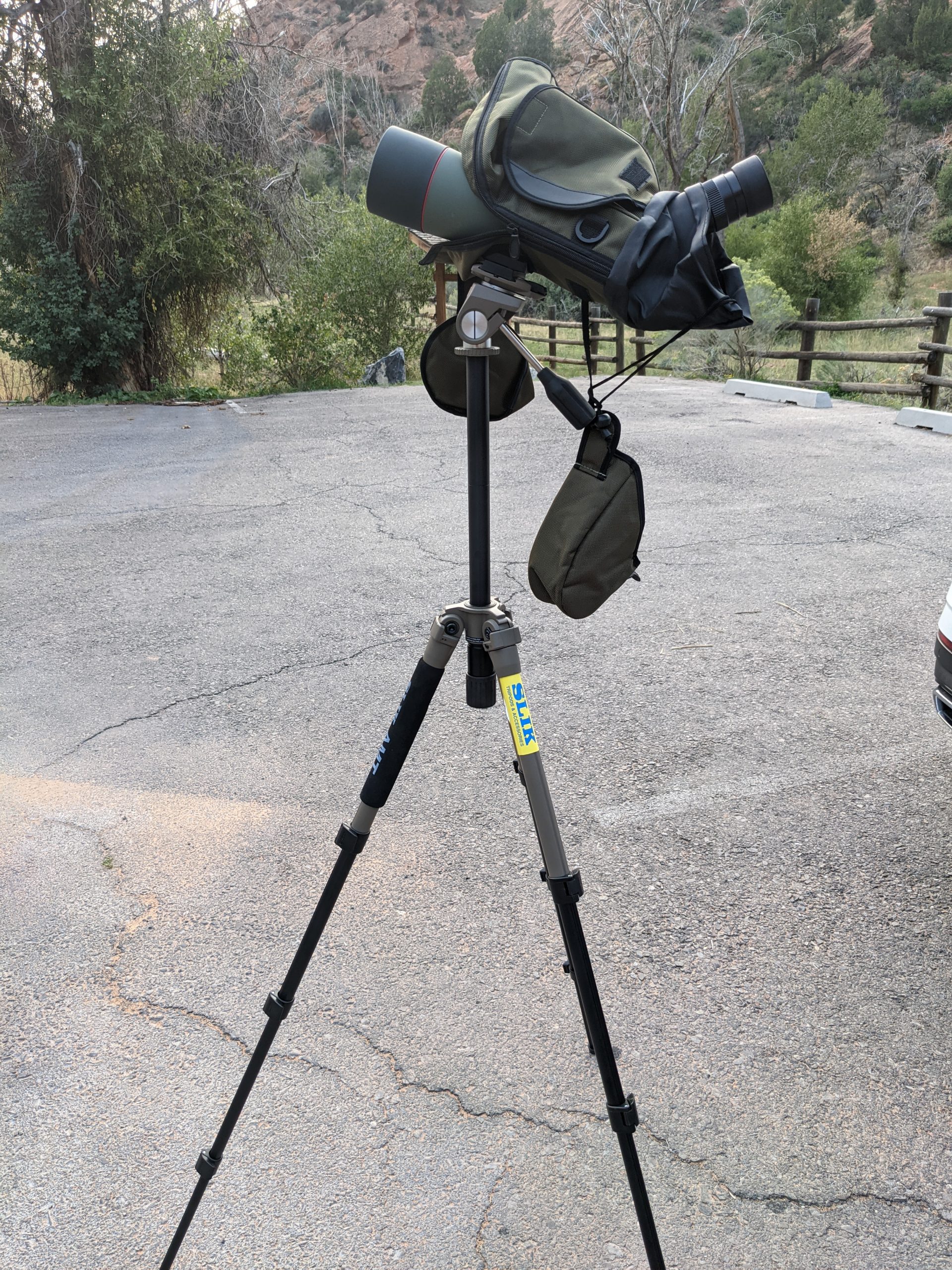 The SLICK Pro 340 ez is a unique tripod. The head is completely controlled by the handle, which when loosened allows for both tilt and twist. The quick mount section also pivots individually, so a person can rotate the attached device in a circle without loosening the pan head.
The unit is stable, quick to deploy, and will easily stablize a large spotting scope, 15 power binos or a good size camera.

Specs:
Supports up to 8.8 lb
Push-and-pull center column for rapid camera, lens, or sport optic positioning
Center column is multi-sectional, allowing it to be converted to a shortened center column that allows the tripod to be set at a minimum height of 18.1″, or 9.0″ when the column is shortened
Tripod can be set to a maximum height of 45.8″, 48.9″ when the column is shortened as well as fully raised, and 58.0″ with the complete column fully raised
Column is reversible, facilitating low-angle photography where an attached camera is positioned among the tripod’s legs instead of above them
Legs each feature four sections, an independent spread, a 3-position angle lock, and a flip lock for rapid deployment
Foam covers on each of the legs provide a secure and comfortable grip
Rubber feet for stability
Two-way, pan-and-tilt head can be rotated 360°, and tilted 90° backwards or forwards
Head rotation, as well as backwards-and-forwards-tilt movements function simultaneously
Quick release plate secures to the tripod’s pan-and-tilt head using a quick release cam lock
Friction lock for cam lock assembly allows cam lock assembly and head to rotate 360° independently of each other
While the friction lock for the cam lock assembly is opened; attached camera, lens, or sport optic is physically held in place while the head can then be rotated 90° toward the left and tilted 90° forward to achieve portrait orientation
Two built-in bubble levels along the edges of the cam lock accommodate landscape or portrait orientations
Weighs 3.5 lb, measures 19.3″ when folded
Construction Details
Aluminum, magnesium, and titanium-alloy legs with cast-aluminum 2-way, pan-and-tilt head
Quick release plate with 1/4″-20 mount with anti-slip, cork surface.

I have used the SLICK 340 EZ tripod for my spotting scope and for my binoculars this year. I found it to be very durable both in the outside coating and in the ability to endure tough conditions and still perform well.
The Tripod worked very well for me as I used a KOWA 66 MM objective spotting scope, and a large pair of 15 power binoculars.
The tripod is not perfect, but pretty good for the price. It is a little heavy and a little too short.
However I did love the rugged center post that allows it to extend higher and still be stable.

I would give this a BUY, if you can get it on sale.